Mim was born in England and started her artistic career aged five, decorating walls while being confined to her room for having been naughty.

Obviously an auspicious period as at the same age she was given an award from the Royal Drawing Society in South Kensington, a Diploma which assessed her as being “Good”.

Mim comes from a musical family, her Great Grandmother Adelina de Lara, was a successful concert pianist and star pupil of Clara Shumann. Her Father was a concert Baritone singer, and both her brother Tim Hain and her sister Kit Hain are professional singer songwriters. Kit Hain is also an author of childrens books.

Her education got off to a bad start at a Boarding School in Hertfordshire, which was later closed down, the Head Mistress had up for embezzlement, the school condemned by the Sanitary Inspectors, and only one teacher discovered to be properly qualified.

However she then went to the co-education progressive school Dartington Hall where she happily flourished in the sane creative Academic and Artistic environment.

She later studied at The Accademia di Belle Arti in Florence, and then at Guildford Art School (Pre Diploma), Camberwell Art School (BA Diploma in Fine Art.), a brief course in Printmaking at Hornsey, then later to Central School where she got a MA Distinction in Graphic Design for a six minute animated film “Thank You God”. 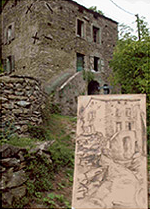 She worked for a few years in the Animation business at Animus Productions in Central London, before leaving to return to Painting in 1985.

She then went to Corsica where she camped for some months in the old ruined Palace, Palazzo Reale, in Santa Maria Poggio, built in the eighteenth century for Theodore Von Neuhoff, a German adventurer who was very briefly King of Corsica, and never stayed there himself.

She returned a few times before buying a small place there and now spends her time between Corsica and London.

She has had numerous private Portrait Commissions in the UK and abroad, and works in Oils, Collage, Charcoal, Conte and Pastels and for a while had a small kiln and made a series of eccentric Teapots, many based on the Chinese horoscope.

Mim lived happily and creatively for 36 years with the successful Italian illustrator and commercial artist Gino D’Achille, who came to the UK in the Sixties and was considered one of it’s most successful illustrators.

They were married in March 2013, having failed to marry in Corsica the previous year, due to French bureaucracy.  To save disappointment and as the event had been planned, they went ahead with a ‘fake wedding’ which was filmed by friend and film maker, Jim Burge. 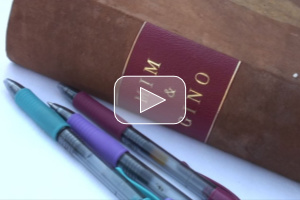 Sadly Gino latterly had Parkinson’s, diabetes and heart disease – but he never stopped drawing almost up to his death in Februry 2017. He was always courageous, smiling, much loved, and is greatly missed. 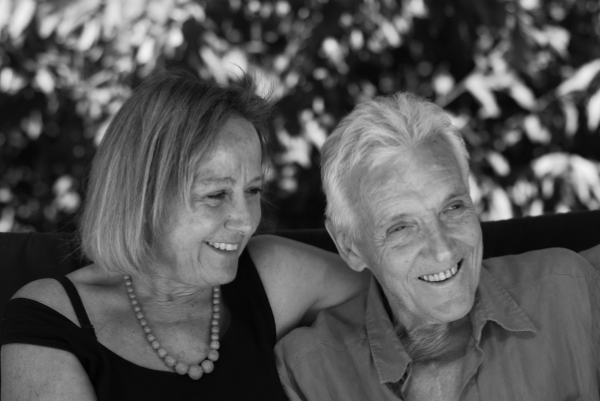